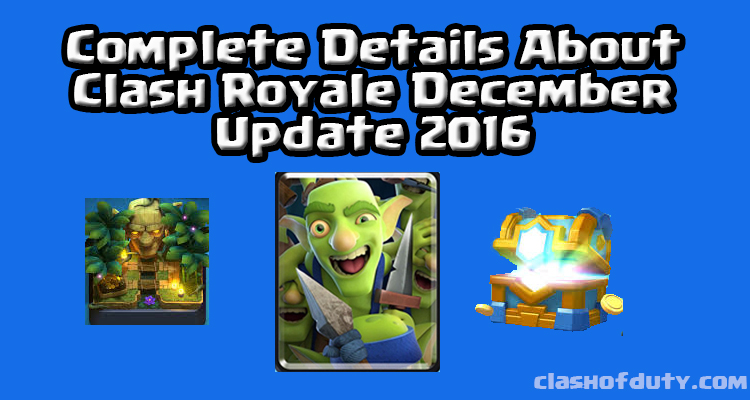 Eager to know what are the cards going to be added? Check here Apart from cards, Some new things also going to be added, For Clashers every Christmas is a treat because all the Supercell games such as Clash of Clans, Clash Royale, Hay Day, Boom Beach going to have fresh updates.

What is new in Clash Royale December Update 2016? New arena called Jungle arena will be added, It looks alike to Jungle, So it is named as Jungle, I don’t want to write much about this arena, You can understand more by watching this amazing video tutorial.

This video is made by our friend, Nickatnyte; You can subscribe to his channel to Facebook, This video all things about this new arena.

Clash Royale is going to add a new fighting style, Which is called Crown Duel Challenge. This is one of the exciting features of this Clash Royale December Update. Here are some facts about it.

It is the simple basic concept but, I hope Supercell will make this fighting style balanced, I will make a separate article on how to master in Crown Duel Challenge. Check out the video to get idea about it.

This feature is one of the awesome feature, Which is going to be added. As the name says it is Clan Crown chest.

Check the video for information.

Some Other Stuff Going to come

The above things are the best things about this Clash Royale December Update. And there are some of them left.

So these are some of the new things to be added in this Clash Royale December Update, The new cards will be released every two weeks. I hope you would have enjoyed this article. Share it with your friends, So that it might help them.