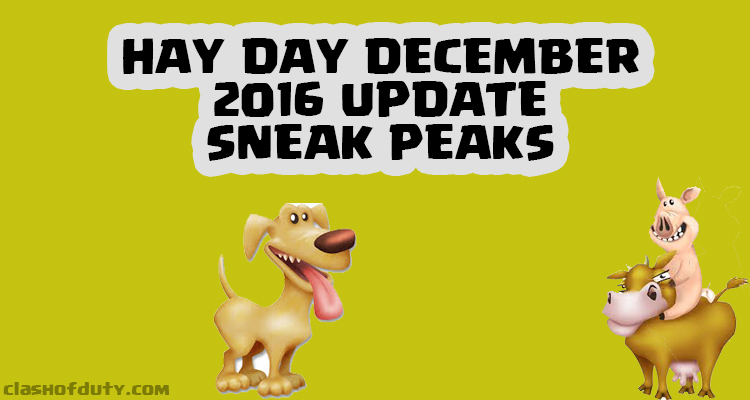 Hay Day December Update 2016 is going to come before the early week of Christmas, Supercell always celebrates the Christmas with new stuff added to their games, We received information for Hay Day and Clash of Clans and not yet for other two games about the December Update.

There is some interesting stuff going to be added in Hay Day December Update 2016, Some of them are confirmed by the officials of Supercell, In this article, I will list you, What are the going to be added, There are numerous sneak peaks are out.

When the Update is Going to Come for Hayday??

The update is expected one week earlier to Christmas, Around December 19 – 23, But it is not officially confirmed yet, You can wait for few days to know the exact information, The best thing you can do is just subscribe to my blog, I can help you reaching directly to your Inbox 🙂

The red event which is charity event happens every year, The funds generated in this game for a particular time period is donated to charity for some cancer patients or something it usually falls between December 19-23.

Well, A gadget called Friend Book is going to be added and some new food and decorations will be added in this Hay Day December Update 2016, Check below.

Few Words About the Friend Book

It is similar to address book, Where you can add your friends in the game.

By using this Friend Book, You can accept, Decline and even block the users, This feature will be very handy to gamers.

New crops such as Banana and Grape is going to be added, Banana grows on the tree, And Grape is land cultivated crop.

So the gamers who are in high level will get good benefits of this December Update.

There are a numerous number of decorations and food is going to be added. Check it out.

New decorations and the food items are looking awesome, Here are some of its names.

These are things added for decorations.

Here are some eatables, Have a crispy breakfast 🙂

These are some of the eatables going to be added in this update. The picture for all of this is listed above.

Here are some of the video tutorial from our friend Ricky Burnett. He is awesome man.

I hope you guys would have enjoyed the article regarding the Hay Day December Update, Do subscribe guys to receive information about these games, Fast as light. Thanks for reading.