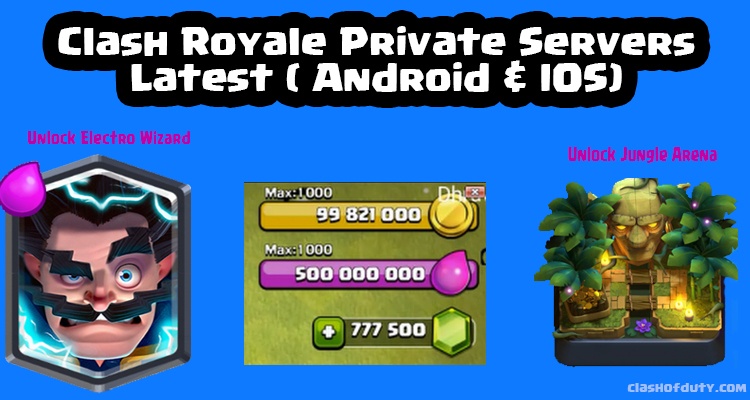 One cannot simply spend all his hard spent money for purchasing Gems which is major source of income for Supercell, Believe it or not, these Game Developers are earning for every MB you use on their applications bro This month, Supercell released some of the new Sneak Peaks, Check them out on their Official Site. So People like to try those new things such as Electro Wizards, Executioner and lots more. They cannot wait till the update to come. They can quench their thirst download latest version of Clash Royale Private Servers and also they can Clash with Unlimited resources.

In this article, We are going to provide two versions for Android users; One is for rooted phones and another is for normal Android phones. The Same thing is for the IOS one is for JailBroken devices and another is for non-Jail broken devices, We have tested two methods which are working perfectly. And some other methods were tested by our developers :), And they said its working.

Important Note Dude
All these methods are tested and is working, If any methods not working, Donot give up at first try, Try using another method, If You still face any problems, You can contact me anytime.

If you used Clash Royale Private Servers before, Then you might know what are the things basically in it. Some additional things are added along with it in this new version of private server.

These are some of the Pros in this latest version.

Playing in Private Servers have some cons, Because prolonged cheat mode on causes boredom.

Important Note!!
Before proceeding, Make sure you don’t use the Gmail id which you use to login Clash Royale Official Servers, If you do login, You will be in risk of getting banned by Supercell, Do it carefully!

This method is much more complicated than the first method.

Important Note!!
This method requires you Android Device to be Rooted! If your device is not rooted, You can search for tutorials on Youtube, On how to Root.

The Private Server will be launched.

In this method, As mentioned in the title No Jailbroken Device is required, However, don’t use the Apple ID which you use to login to the official servers, Use or create some other non-used ids.

Important Note!!
This method is full and fully Geo-Based, Users have to select DNS according to their locations.

Important Note!!
To make this work! Your ISP should not be behind any UDP ports, If you are behind any firewalls, Contact your ISP to fix it or else do Port forwarding, Yo can find tutorials on Youtube according to your ISP.

This method requires a JailBroken device, If you have any old iPhones, You can Jailbreak it, Check some tutorials on Youtube. Once you are done, Follow the steps mentioned below.

The video, Will demonstrate you, How the private servers work, however, it will not mention any of the methods which I listed above, This video is for fun purpose, Enjoy watching it.

It’s time to close this article, And start gaming on Private Servers, The much-awaited troops such as Elector Wizard, Executioners and you can also use all of the troops, With unlimited Gold, Elixir and Gems, IOS users choose DNS servers based on your locations, Don’t get upset, If it is not working for the first time, My friend got connected to Private Servers after he tried 3rd time, Do subscribe and we will update the Servers and DNS often. Thanks for Reading, Have happy time Clashers !

These methods are really working, But the second method is lagging, please check.

Yes Jo, People are facing some lags, Wait for the next update and it will be fixed.

check the latest version of it.

I love the CLashmas Update of Clash royale private.

Actually, We don’t have DNS address for carribean areas, You can subscribe and wait. 🙂

I dont have jail broken device 🙁

Try other methods madam, I would love to hear more from you.

What are the new cards going to be added?

Thanks for awesome tutorial.

adfly not working in my country.

Tim, Use proxy or Vpn.

The servers works only 2 hrs per day, As by research.

I have one problem, i don’t know what my hosts file is supposed to look like can you send a screenshot?

Ryan, It looks like command prompt, Do check it.

OMG! this is whole collection of CR private servers thanks alot