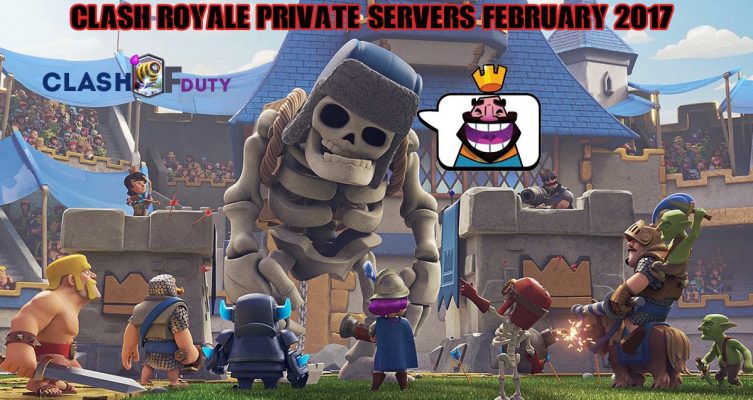 It is my pleasure to welcome you all to this blog, By the end of this article, You will get a guaranteed working Clash Royale Private Servers which contains the latest update, New troops and new arenas all these things are added in this awesome update. In this article, I will guide you how to get into the Clash Royale Private Servers February for both Android and iOS users.

Android users, They just need to download the app’s and follow the steps mentioned below, There are some important steps which are needed to be followed, Then rest is fine, For iOS users we will provide a list of Updated Clash Royale DNS address, Which they have to enter based on their geo locations, We have updated the APK version of Barbarian’s Royale with some new features.

Look at the image above, It is the Giant Skeleton laughing over all other small troops :D, Funny right. We have also included a feature in this new Clash Royale February Private Servers update, There will be a giant skeleton, You have to deploy a variety of army to beat him, We have given Giant Skeletons some extraordinary power, He will throw bombs. It is called Giant Skeleton Madness This is called Giant Skeleton Madness.

There are new features added in the update, However, some notable features are

Clash Royale Private Servers February 2017 – How to Get in Android

Barbarians Royale Version 1.7 is provided below, You have to follow the steps.

Download Links
All the DNS addresses are GEO Based, Choose one near to your GEO Location, They are tested and working but for 3-4 hours only, We will update the DNS servers regularly, Stay tuned, Subscribe our article. If it doesn’t work for you, Just keep on trying.

As I said above, We will provide you with some geobased DNS addresses, Try the address which is very near to you.

If you have any problems in installing Clash Royale Private servers, Feel free to contact me in the comment section below. Do subscribe to get updates instantly to your inbox, Thanks for reading, Share this article with your friends.

after installing babarians royale, it gives me the error connection lost.
how to help this, the problem is not the internet connection

keep on trying it bro. There might be connection problems.

Do i need to delete my clash royale and install again? ios

I cant connect me to the europe server (i cam from germany, sorry for this bad englisch) ((i have an iphone 5 with ios10))

How to replace wifi ip

In settings in DNS.

Quick question, this was the latest link, but does the fire emblem heroes server hack work. It’s been a while so I was wondering if it needs to be updated

New version is on the way bro.

It is working, Thanks alot.

Good to hear that, Which GMT u tried, You can suggest other people, So that they can try on that time.

i cant open download. pls send me a link on email 🙂

wait for few seconds to get download links open.

50% stuck on bluestacks pls repair it

try using a vpn bro. And connect via US ip.