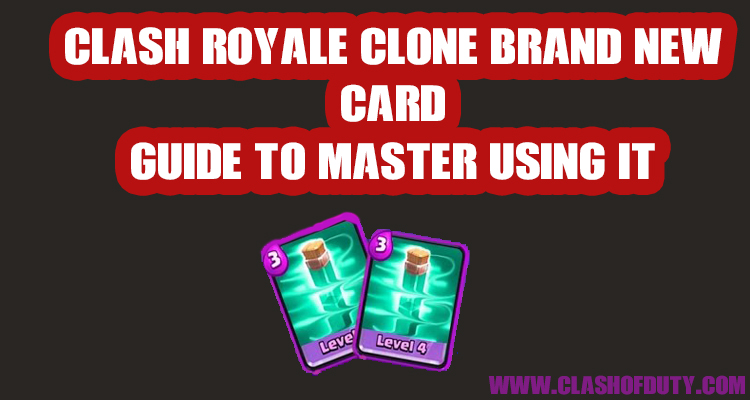 Clash Royale Clone Card is out, It is the brand new card added by Supercell to the game Clash Royale, It has many features, As the name tells, The card is used to clone units in its range, The clones are deadly powerful, They deal damage according to the level of the clone spell, If you use it wisely, Then Victory is for you sure 🙂 This article is going to be fully about Clash Royale Clone Card and I am also including a video So that you can check it out at the end of this article.

These are some of the main facts about Clash Royale Clone Card and I will suggest some strategies which you can use on.

Note – Most important thing is that, While cloning, Make sure your original troop moves towards the target first, So that your Cloned troops can damage while original troops absorb damage, Check out the video for more information.

Clash Royale Clone Card – Strategies That Can Be used,

There are varitey of strategies which can be used with Clash Royale Clone Card, Some of them are listed below.

So, That is the most important strategies, That can be used.

Clash Royale Clone Card – How to Counter it.

If enemy uses, Clone Card you can easily counter it by using splash damaging units like Wizards, Ice golems and also spells such as zap, Poison, Fireball works very well against them. Check out the video for more information.

So, That’s all about the Clash Royale Clone Card, Hope you had enjoyed the article and learn something useful, Do share it with your friends, They might find this content useful too, Subscribe to receive more articles like this, Thanks. Check out the video below.