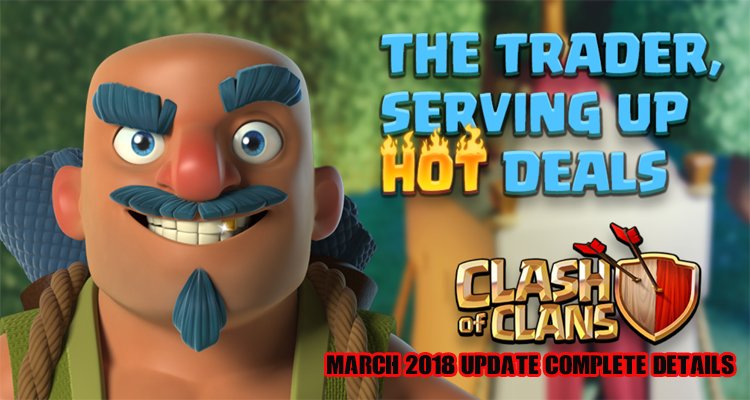 Clash of Clans March 2018 Update – Clashers it is Spring 2018, And before starting of this month, Supercell posted on their official Facebook page, About their new upcoming update this month, Of this update the things which attracted me the most is the new clan games challenges and new magic items and a guy called trader which will help you to buy new magic items easily, Read this article till end, Will be briefing it. Look at the above-leaked image which shows the trader, In this Clash of Clans March 2018 Update, Lot of balancing changes also going to take place with a reduction in resources cost, Time and much more. These are the things which supercell is going to make changes in the interesting Clan Games, As said above there are lot of interesting Clan Games challenges which are coming ahead. And one very good news is that Clan Games are also going to earn you Clan XP, Clan XP is obtained till now only by Clan Wars, But after this Clash of Clans March 2018 update, Clan XP will also be obtained from Clan Games, The amount of XP is determined by how much amount you contribute to the clan.

The following challenges are to be added to Clan games to make the game more interesting.

These are some of the new game challenges which are going to be added soon.

There are 3 new magic items which are going to be added in Clash of Clans March 2018 Update, The magic items are unlocked by completing clan games.

And one of the big thing which is to be added in Clan Games is that Clan XP, You can now earn Clan XP from Clan Games.

Note
Amount of Clan XP depends upon the Contribution of you in the Clan Games.

And now the second part of Clash of Clans March 2018 Update is that the Balancing Updates.

So good news for P.E.K.K.A lovers, High-level P.E.K.K.As are going to be unlocked prior levels of Town Halls, Now you can destroy enemy base with Powerful P.E.K.K.A s

Inferno Tower was considered as one of the best defensive buildings around, Its damage has been increased in Clash of Clans March 2018 Update.

Traps which help us to defend our base very well, The new level of traps are now more dangerous and deadly which are going to be added in the Clash of Clans March 2018 Update. These are some of the Balancing Changes going to be added in the upcoming Clash of Clans 2018 Spring Update.

The trader is a travelling merchant whose job is to travel around and get you some unique needed Magic items and special deals. It has been mentioned by Supercell that Trader will provide you 3 Special deals every day, Which you can purchase from him. This guy is going to be very useful If needed some rare magic spells.

Watch the video for more info! We hope you guys liked details about the upcoming Clash of Clans Spring 2018 Update, This update is an interesting one, Do subscribe to Clash of Duty and Press the bell icon to receive updates instantly as soon as it has been fetched by our Clash of Duty Team. Clash of Clans Private Servers March 2018 is also coming prior to all these features mentioned in this update, Thanks for reading, stay tuned.

at what town hall level will the new trap levels become available?

What kind of trap you want details? Giant bomb level 5 is unlocked at town hall 11.

It’s an awesome piece of writing for all the web visitors; they will get benefit from it I am sure.